A new website is in the works, Please check back 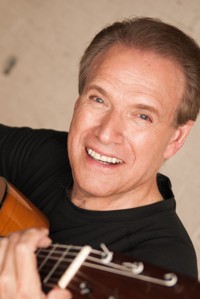 This brilliant American Flamenco virtuoso has evoked standing ovations on four continents. He has been acclaimed in Mexico City for performances, "equal to those on any Flamenco stage in Madrid, Seville or Andalusia." His Carnegie Recital Hall and Kennedy Center concerts were enthusiastically received, but perhaps the highest tribute comes from Madrid: "He has duende, the Spanish equivalent of soul!"A protégé of the legendary Carlos Montoya, Radford lived and traveled in Spain where he immersed himself in the musical wisdom of the Gypsy Flamenco guitar masters Diego del Gastor, Pepe de Badajoz and others. In addition, he had master classes with Andres Segovia, Pepe Romero and Jose Thomas. He is the only individual to be awarded a Fulbright Scholarship to Spain in Flamenco guitar.

His international tours have taken him to fifteen countries from Australia to Switzerland and from Canada to Panama. He toured for the U.S. State Department as a Musical Ambassador in Mexico, Guatemala and other Latin American countries. He is currently on tour to colleges and concert series across the United States, and his exciting CD, Viva Flamenco! and DVD Live Your Passion! are available world-wide.

This gifted artist takes you far beyond the usual guitar concert. Radford complements his masterful technique with an illuminating narration which recreates the very essence of this ancient folklore, Flamenco - the heartbeat of Spain.

Radford was born in California, grew up in Oklahoma and now lives in St. Louis, Missouri (USA) where he continues his career as one of the most successful ambassadors of Flamenco music in the world.

Mr. Radford’s Flamenco expression has been described by noted guitarist Oscar Ghiglia this way: "It is rare, even for a Gypsy, to have the gift to lead one into the somber, unforgettable world of sounds of the real Flamenco, and yet he - an American - is among the few who have given me this artistic experience."

The great Spanish guitarist Pepe Romero recently wrote: "I am deeply impressed with Ronald Radford's genuine ability to transmit the essence of flamenco as an art and as a philosophy for living to an audience who may never have had the opportunity to be in direct contact with this fantastic culture and energy. He does it in such a way that takes away the fears and misgivings from the audience - allowing them to participate in this mysterious and powerful flamenco culture. He gains the trust of his listeners and guides them on a magical journey."